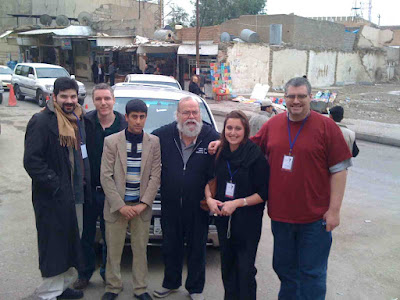 Posing at Erbil Citadel (oldest constantly settle place on earth, 7000 years) Jonathan Borock, Jason Jarvis, unknown Iraqi, Alfred Snider, Megan Harlow, Matt Stannard.
With over 100 students signed up for this event (and the Mesopotamian Debating Championship) the faculty held a meeting tonight in the Hotel Jiyan in Erbil, Iraq. The World Debate Institute is proud to be part of this effort as a founding and organizing partner.
The faculty consists of:
Here are the motions we will be working with:

a. THBT USA SHOULD NOT WITHDRAW ITS MILITARY FROM IRAQ,

b. THBT UNIVERSITY EDUCATION SHOULD NOT BE FREE,

d. THBT CLOTHING DOES NOT REPRESENT THE CHARACTER OF THE INDIVIDUAL,

e. THBT DEVELOPED COUNTRIES SHOULD NOT ACCEPT THE MIGRATION OF SKILLED PROFESSIONALS FROM DEVELOPING NATIONS,

f. THBT WE SHOULD NOT EAT MEAT,

g. THBT BARACK OBAMA SHOULD NOT HAVE WON THE NOBEL PEACE PRIZE.

h. THW SUPPORT A HUSBAND TAKING AN ADDITIONAL WIFE ONLY WITH THE OFFICIAL APPROVAL OF ALL OTHER WIVES.

i. THBT IRAQ SHOULD ABOLISH THE DEATH PENALTY.

Posted by Alfred Charles Snider at 11:53 AM