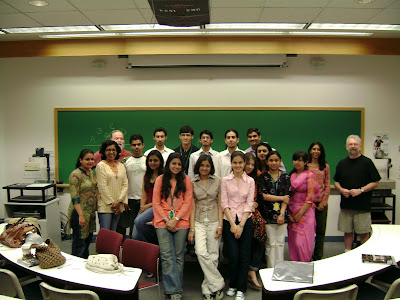 On a grant from the US Department of State seventeen young Pakistani students are at the University of Vermont for four weeks attending the Study of the United States-Institutes for Student Leaders. After a rigorous selection process these students were brought to the USA and are at the University of Vermont while other groups at at eight other colleges and universities. Find more information at https://sharepoint.uvm.edu/sites/ce/global/isi/_layouts/viewlsts.aspx

This week they are attending a special World Debate Institute session held just for them. The goal is to sharpen communication skills as well as familiarizing them with some of the discourse habits of Vermont, including small group discussion and larger town meeting simulations. The instructors are Alfred Snider, director of WDI, and John Meany, director of forensics at the Claremont Colleges in California.

After one day of instruction in public speaking and argumentation on Monday, students delivered critiqued speeches on Tuesday morning and then after lunch formed small group discussion pods and began working on their presentation for the next day. On Wednesday morning the entire crew was at Vermont Community Access Media http://www.vermontcam.org/ . They were there to tape three episodes of the local television program "Flashpoint," offered by the University of Vermont debate program, the Lawrence Debate Union.

The students staged three 28-minute discussions on three topics: Stereotypes of Muslims and Americans, Modern role of the United Nations and finally Justifications for intervention. The program tapings went very well and they will soon be available at the Flashpoint website http://flashpointtv.blogspot.com/ .

Tomorrow the students will have their town meeting simulation, but the topic of it will be an international one and they will have some assigned roles.
Posted by Alfred Charles Snider at 1:50 PM